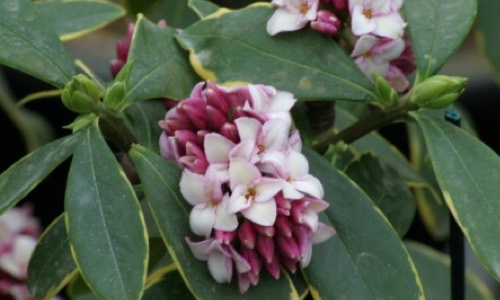 Daphne  Greek: Δάφνη, meaning “laurel”) is a genus of between 50 and 95 species of deciduous and evergreen shrubs in the family Thymelaeaceae, native to Asia, Europe and north Africa. They are noted for their scented flowers and poisonous berries.

The leaves are undivided, mostly arranged alternately (although opposite in D. genkwa). The flowers lack petals and have four (rarely five) petaloid sepals, tubular at the base with free lobes at the apex. The flowers are grouped, either in clusters in the leaf axils towards the end of the stems or in terminal heads. They range in colour from greenish-yellow to white, bright pink and purple; most of the evergreen species have greenish flowers, while the deciduous species tend to have pink flowers. Many species flower in late winter or very early spring. The fruits are one-seeded drupes, which in some species are fleshy and berry-like, in others dry and leathery.

If eaten whole, bay leaves (Laurus nobilis) are pungent and have a sharp, bitter taste. As with many spices and flavorings, the fragrance of the bay leaf is more noticeable than its taste. When dried, the fragrance is herbal, slightly floral, and somewhat similar to oregano and thyme. Myrcene, which is a component of many essential oils used in perfumery, can be extracted from the bay leaf. They also contain the essential oil eugenol.

Bay leaves were used for flavoring by the ancient Greeks.They are a fixture in the cooking of many European cuisines (particularly those of the Mediterranean), as well as in the Americas. They are used in soups, stews, meat, seafood, vegetable dishes, and sauces. The leaves also flavor many classic French dishes. The leaves are most often used whole (sometimes in a bouquet garni) and removed before serving (they can be abrasive in the digestive tract). Thai cuisine employs bay leaf (Thai name bai kra wan) in a few Arab-influenced dishes, notably massaman curry.[5]

In Indian and Pakistani cuisine, bay laurel leaves are sometimes used in place of Indian bay leaf, although they have a different flavor. They are most often used in rice dishes like biryani and as an ingredient in garam masala. Bay (laurel) leaves are frequently packaged as tejpatta (the Hindi term for Indian bay leaf), creating confusion between the two herbs.

In the Philippines, dried bay laurel leaves are added as a spice in the Filipino dish Adobo.

Bay leaves can also be crushed or ground before cooking. Crushed bay leaves impart more of their desired fragrance than whole leaves, but are more difficult to remove, and thus they are often used in a muslin bag or tea infuser. Ground bay laurel may be substituted for whole leaves, and does not need to be removed, but it is much stronger due to the increased surface area and in some dishes the texture may not be desirable.

Bay leaves can also be used scattered in a pantry to repel meal moths,flies.roaches,mice,and silverfish.

Bay leaves have been used in entomology as the active ingredient in killing jars. The crushed, fresh, young leaves are put into the jar under a layer of paper. The vapors they release kill insects slowly but effectively, and keep the specimens relaxed and easy to mount. The leaves discourage the growth of molds. They are not effective for killing large beetles and similar specimens, but insects that have been killed in a cyanide killing jar can be transferred to a laurel jar to await mounting. It is not clear to what extent the effect is due to cyanide released by the crushed leaves, and to what extent other volatile products are responsible.