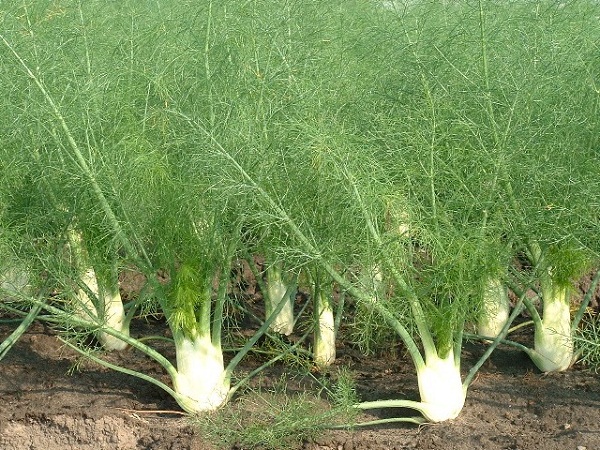 Fennel (Foeniculum vulgare) is a flowering plant species in the carrot family. It is a hardy, perennial herb with yellow flowers and feathery leaves. It is indigenous to the shores of the Mediterranean but has become widely naturalized in many parts of the world, especially on dry soils near the sea-coast and on riverbanks.

It is a highly aromatic and flavorful herb with culinary and medicinal uses and, along with the similar-tasting anise, is one of the primary ingredients of absinthe. Florence fennel or finocchio is a selection with a swollen, bulb-like stem base that is used as a vegetable.

Fennel is used as a food plant by the larvae of some Lepidoptera species including the mouse moth and the anise swallowtail.

Fennel is widely cultivated, both in its native range and elsewhere, for its edible, strongly flavored leaves and fruits. Its aniseed flavor comes from anethole, an aromatic compound also found in anise and star anise, and its taste and aroma are similar to theirs, though usually not as strong.[9]

Florence fennel (Foeniculum vulgare Azoricum Group; syn. F. vulgare var. azoricum) is a cultivar group with inflated leaf bases which form a bulb-like structure. It is of cultivated origin,[10] and has a mild anise-like flavor, but is sweeter and more aromatic. Florence fennel plants are smaller than the wild type.[11] The inflated leaf bases are eaten as a vegetable, both raw and cooked. Several cultivars of Florence fennel are also known by several other names, notably the Italian name finocchio. In North American supermarkets, it is often mislabeled as “anise”.[12][13]

Fennel has become naturalized along roadsides, in pastures, and in other open sites in many regions, including northern Europe, the United States, southern Canada, and much of Asia and Australia. It propagates well by seed, and is considered an invasive species and a weed in Australia[15] and the United States. In western North America, fennel can be found from the coastal and inland wildland-urban interface east into hill and mountain areas, excluding desert habitats.[16][17] 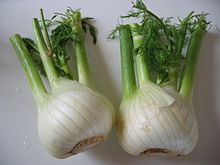 Florence fennel is one of the three main herbs used in the preparation of absinthe, an alcoholic mixture which originated as a medicinal elixir in Switzerland and became, by the late 19th century, a popular alcoholic drink in France and other countries.

In a 100 gram amount, fennel seeds provide 345 calories and are a rich source (more than 19% of the Daily Value, DV) of protein, dietary fiber, B vitamins and several dietary minerals, especially calcium, iron, magnesium and manganese, all of which exceed 100% DV (table). Fennel seeds are 52% carbohydrates, 15% fat, 40% dietary fiber, 16% protein and 9% water (table).

Sugar-coated and uncoated fennel seeds are used in India and Pakistan in mukhwas, an after-meal snack and breath freshener.

The bulb, foliage, and seeds of the fennel plant are used in many of the culinary traditions of the world. The small flowers of wild fennel (known as fennel “pollen”) are the most potent form of fennel, but also the most expensive. Dried fennel seed is an aromatic, anise-flavored spice, brown or green in color when fresh, slowly turning a dull grey as the seed ages. For cooking, green seeds are optimal.The leaves are delicately flavored and similar in shape to those of dill. The bulb is a crisp vegetable that can be sautéed, stewed, braised, grilled, or eaten raw. Young tender leaves are used for garnishes, as a salad, to add flavor to salads, to flavor sauces to be served with puddings, and also in soups and fish sauce.

Fennel seeds are sometimes confused with those of anise, which are similar in taste and appearance, though smaller. Fennel is also used as a flavoring in some natural toothpastes. The seeds are used in cookery and sweet desserts.

Many cultures in India and neighboring countries (where it is known as saunf in Hindi), Afghanistan, Iran, and the Middle East use fennel seed in cooking as one of the most important spices in Kashmiri Pandit and Gujarati cooking. It is an essential ingredient of the Assamese/Bengali/Oriya spice mixture panch phoron[22] and in Chinese five-spice powders. In many parts of India and Pakistan, roasted fennel seeds are consumed as mukhwas, an after-meal digestive and breath freshener, or candied as comfit.

Fennel leaves are used in some parts of India as leafy green vegetables either by themselves or mixed with other vegetables, cooked to be served and consumed as part of a meal. In Syria and Lebanon, the young leaves are used to make a special kind of egg omelette (along with onions and flour) called ijjeh.

Many egg, fish, and other dishes employ fresh or dried fennel leaves. Florence fennel is a key ingredient in some Italian and German salads, often tossed with chicory and avocado, or it can be braised and served as a warm side dish. It may be blanched or marinated, or cooked in risotto.

Fennel seeds are the primary flavor component in Italian sausage. In Spain, the stems of the fennel plant are used in the preparation of pickled eggplants, berenjenas de Almagro. An herbal tea or tisane can be made from fennel.

On account of its aromatic properties, fennel fruit forms one of the ingredients of the well-known compound liquorice powder. In the Indian subcontinent, fennel seeds are also eaten raw, sometimes with a sweetener.