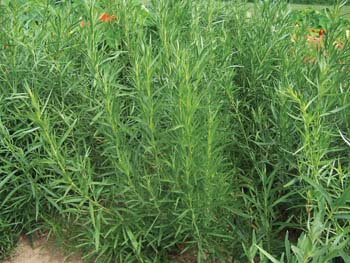 Tarragon (Artemisia dracunculus), also known as estragon, is a species of perennial herb in the sunflower family. It is widespread in the wild across much of Eurasia and North America, and is cultivated for culinary and medicinal purposes in many lands.

One sub-species, Artemisia dracunculus var. sativa, is cultivated for use of the leaves as an aromatic culinary herb. In some other sub-species, the characteristic aroma is largely absent. The species is polymorphic. Informal names for distinguishing the variations include “French tarragon” (best for culinary use), “Russian tarragon” (typically better than wild tarragon but not as good as so-called French tarragon for culinary use), and “wild tarragon” (covers various states).

Tarragon grows to 120–150 cm (47–59 in) tall, with slender branched stems. The leaves are lanceolate, 2–8 cm (0.79–3.15 in) long and 2–10 mm broad, glossy green, with an entire margin. The flowers are produced in small capitulae 2–4 mm diameter, each capitulum containing up to 40 yellow or greenish-yellow florets. French tarragon, however, seldom produces any flowers (or seeds). Some tarragon plants produce seeds that are generally only sterile. Others produce viable seeds. Tarragon has rhizomatous roots and it readily reproduces from the rhizomes.

French tarragon is the variety generally considered best for the kitchen, but is never grown from seed as the flowers are sterile; instead it is propagated by root division. It is normally purchased as a plant, and some care must be taken to ensure that true French tarragon is purchased. A perennial, it normally goes dormant in winter. It likes a hot, sunny spot, without excessive watering.

Russian tarragon (A. dracunculoides L.) can be grown from seed but is much weaker in flavor when compared to the French variety. However, Russian tarragon is a far more hardy and vigorous plant, spreading at the roots and growing over a meter tall. This tarragon actually prefers poor soils and happily tolerates drought and neglect. It is not as strongly aromatic and flavorsome as its French cousin, but it produces many more leaves from early spring onwards that are mild and good in salads and cooked food. Russian tarragon loses what flavor it has as it ages and is widely considered useless as a culinary herb, though it is sometimes used in crafts. The young stems in early spring can be cooked as an asparagus substitute. Horticulturists recommend that Russian tarragon be grown indoors from seed and planted out in the summer. The spreading plants can be divided easily.

Tarragon is one of the four fines herbes of French cooking, and is particularly suitable for chicken, fish and egg dishes. Tarragon is the main flavoring component of Béarnaise sauce. Fresh, lightly bruised sprigs of tarragon are steeped in vinegar to produce tarragon vinegar.

Tarragon is used to flavor a popular carbonated soft drink in the countries of Armenia, Azerbaijan, Georgia and, by extension, Russia, Ukraine and Kazakhstan. The drink, named Tarhun (Armenian pronunciation: [tɑɾˈxun] Թարխուն), is made out of sugary tarragon concentrate and colored bright green.

In Iran, tarragon is used as a side dish in sabzi khordan (fresh herbs), or in stews and in Persian style pickles, particularly ‘khiar shoor’.

In Slovenia, tarragon is used in a variation of the traditional nut roll sweet cake, called potica. In Hungary a popular kind of chicken soup is flavored with tarragon.

cis-Pellitorin, an isobutyramide eliciting a pungent taste, has been isolated from the tarragon plant.